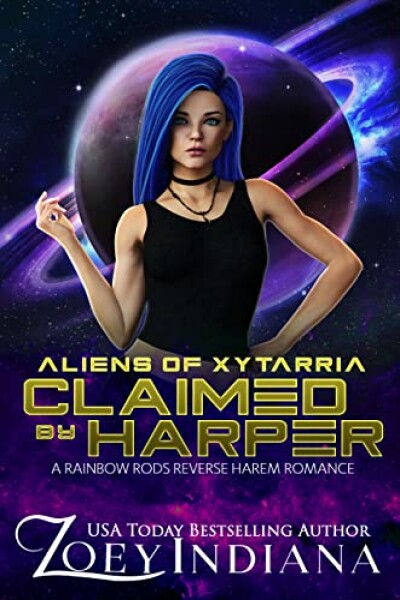 Maintaining the peace treaty between Banta and the war-happy Hydri took its toll on me. It's felt like years since I've smiled. Honestly, relations between the two colonies have been so tense, I haven't wanted to be around anyone, not even Ushko.

Relations within my pod have been tense. Ushko's grown more distant, refusing to leave his personal space even for work. If it wasn't for his skill, he'd have lost his job years ago. And Vorti had grown angry, more than I've ever seen him before. He refuses to come home for days. He'd rather drown himself in his work than admit he has a problem.

Not that I'm any better. I couldn't stand the idea of talking to Hydri's asshole diplomat another day. I wanted to rip him to shreds for his obstinate refusal to listen to common sense. Everything in my life felt stagnant. A part of me wondered if I'd ever find meaning to my long life.

So when the representatives asked for volunteers to oversee and greet the females who'd arrived on Xytarria, I signed up immediately. I went to find a distraction… not a mate. So when this adorable little Gashara walked into the marketplace, and I couldn't stop looking at her, it made sense.

Until my skin tingled, igniting emotions and desires I'd never felt before. The grey tones of my skin burned with bright colors I didn't know anything about. What did this tiny human woman do to me?

Harper was my fated mate, the one female the stars decreed would give my soul the passion it needed. The legend of fated mates was so old, it was erased through iterations of my life. But now that I found her, I had to claim her without risking losing her because of the Planetary Mating Program.

Using the power of my pod, I got my one chance to woo her. And the mating bond didn't fail me. Now she's mine, but the rest of the pod needed to claim her too. The representatives were willing to acknowledge the claim, but only if the entire pod agreed.

But Harper ignited the mating bond in them, just as powerfully as she had me.

Except she didn't know the part I played in destroying her home world. How I'd demanded we abduct every female on her planet instead of risking the wrath of the Overlord. My mate lost everything and everyone from her life because of me.

And she could never find out. Not even the mating bond would survive. I had to distract her from the truth, and I'd start by tasting her. My fingers hooked on her pants, pulling them down her delicious thighs and dropping them on the floor. I spread her knees wide open while dipping my head.

No, I'd do everything in my power to make her happy while keeping her too busy to find out the truth. She'd strengthened our pod in the short time she'd been here. Harper renewed the meaning to my life when she'd claimed me. Now I'd give everything I had to ensure she knew how much I needed her.